The Best Solution for High-Speed Video Transmission in Drones

The Best Solution for High-Speed Video Transmission in Drones

Drone plays its role in many places, such as military reconnaissance, surveillance, civil geodesy, shaking, and so on. With the help of a drone and high-definition camera equipment, we can widen our vision. But, the data amount of high-resolution video is quite huge.

With the improvement of ground resolution, the video data need to be transmitted increases in geometric series, and the data code rate also increases rapidly. Thus, high-speed video transmission has become a significant problem, restricting the application of drone.

After many years of efforts, MiNE Media has sorted out a set of perfect drone video transmission solutions in combination with its existing video coding and decoding equipment. The products used are Q7 4G Live Encoder/Q8 4G Live Streaming Encoder and E1005S-SDI-J decoder, which are developed independently. They can help you transmit the video captured by the drone through the network to any other place where the video needs to be viewed. 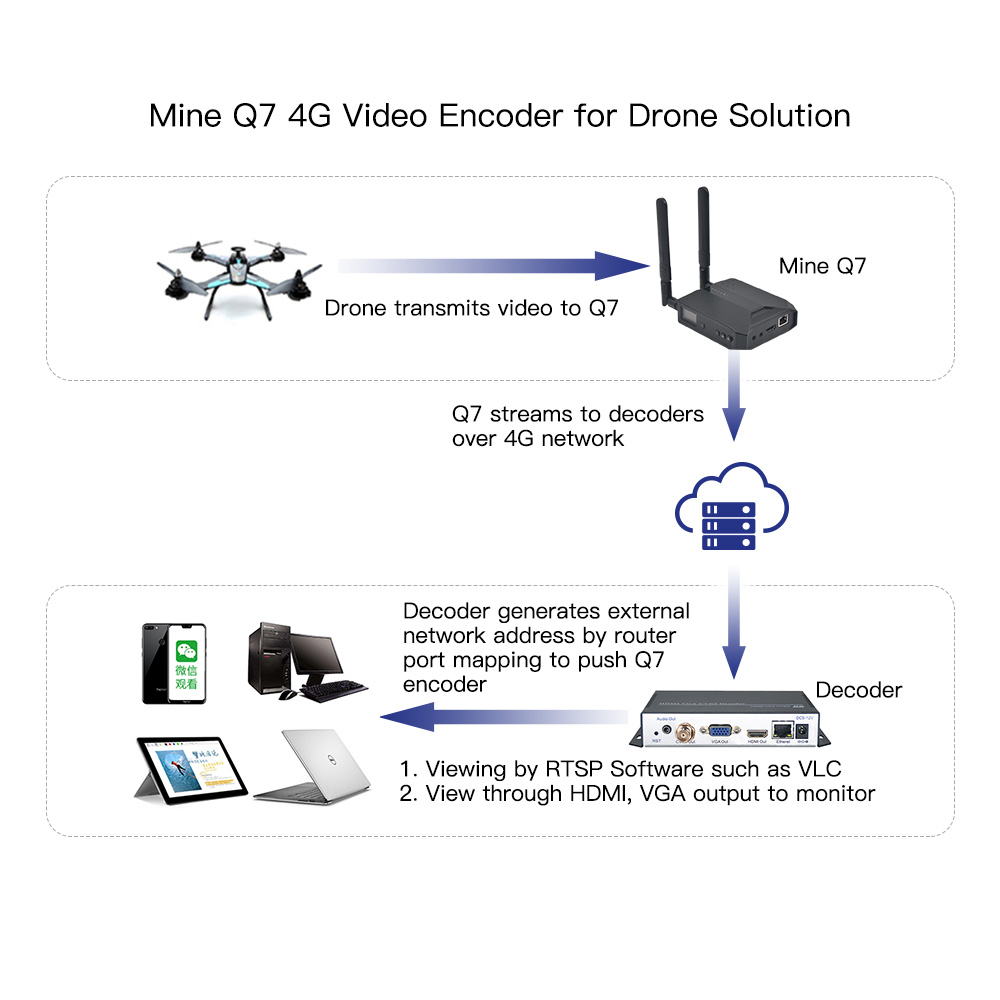 1. The high-definition camera on drone transmits video signal to the Q7/Q8 video encoder. The video signal is encoded by the encoder and compressed by the DSP chip to output the standard TS network stream.

2. By setting the MV-1005S-J HD decoder, a push-flow address is generated. Decoders are generally used in local area networks. At this time, we need to set up our routers and map the ports so that the external network can access our decoders properly. The address format is http://public network IP: port number/live/***. After that, input the address that generates in Q7/Q8 software, thus completing the network streaming after coding by Q7/Q8 encoder. The decoder is sent to the decoder in the LAN. Besides, the corresponding settings are made according to different requirements, such as resolution, etc. The decoder decodes the network flow, generating
different video signal outputs.

3. Video output; can be directly output to the display through HDMI, VGA, CVBS and other interfaces; or can be viewed through the video stream address provided by the RTSP software such as VLC.

A. Simple operation: The operation of the device is simple. You only need to transmit the video signal of the drone to the Q7/Q8 encoder for encoding and transmission. The decoder can decode the network stream to complete the entire operation process.

B. Easy to use: It has an intelligent design, convenient and reliable system, and simple maintenance.

C. Long transmission distance: It can solve the problem of long-distance viewing or saving of images to the local area. The drone using point and the viewing point may not be in the same place. The video stream is converted into a network stream for transmission.

D. Clear transmission image: It uses H.265 / H.264 high-definition digital video compression technology, which has stability, reliability, high definition, low bit rate, and low latency. Besides, the transmitted video can achieve the D1 effect and the image taken by a drone is displayed to the user.

Drones have fantastic capability and potential to change the way we operate things. That’s the reason why their sales are on growth. Not just the military, but many people are embracing the thought of having such devices. But, high-speed video transmission is not achievable in many cases. People can solve this problem by using 4G video encoder designed for drones.